shine a light on me OR two things that happened

so i took some pictures of the light fixture that hangs in my room: 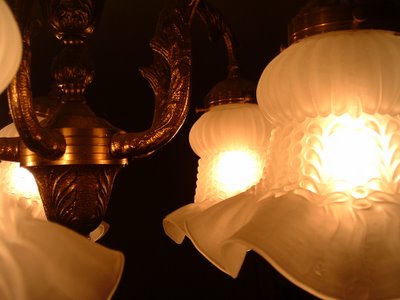 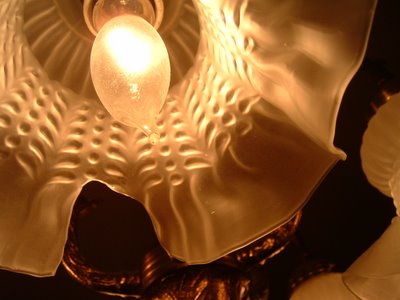 today at the coffee counter i had to (because of the location of where i have to stand and work) listen to a family have a serious conversation about deciding who is going to inherit what when The Father dies. and he was sitting right there. and from what i could tell the brother, sister and mother were trying to tell The Father what he should do with a summer home he has.. giving it to whomever was a bad idea, according to the son, because whomever wouldn't preserve the memory.. and giving money to whomever (i think this whomever person might've been another son/daughter or cousin or stepson/stepdaughter.. whichever it was, they didn't deserve one cent of what this guy has to give, apparently) is a bad idea too. because they would do something ungrateful. it was strange for them to be having this conversation where they were. and the daughter kept choking up and crying and telling her dad that it was pretty hard to have to watch him die and know that he's not going to be around much longer.. and i kept feeling that lump in my throat.. seeing/hearing other people cry always does that to me.. anyhoo.. The Father had a paralyzed face or had face cancer or something so he was completely impossible for me to understand, although his family never hesitated when he said something.. which continued to surprise me, since it was entirely unintelligible to me.

i also saw an old guy yell at some skater kids by the river. one of the kids said "hi mr. jones!" as the old guy walked by. (they had said a wide variety things to numerous people, including me, and so it was pretty obvious that this old guy wasn't mr. jones) well. the confidence slid right off of the kid's face when "mr. jones" actually responded. and not only responded but stopped about seven inches away from the kid and proceeded to ream the kid for disrespect or something. at one point i thought it might get a li'l sticky - the kid reached into his pocket and handed over his iPod and some other stuff to his buddy and flipped his skateboard up and while grabbing it smacked the lip on the ground all aggressive and tough-like. these kids were in eighth grade, maybe ninth. not very old. i wanted to ask the kid if he really thought getting into a fight with an old dude was a good idea. or what exactly the old guy said. from where i was sitting (bench) i couldn't really hear what was being said, but it wasn't pretty on anyone's parts. maybe the old guy had one too many skater kids giving him shit. or maybe his son was a skater kid and they got into a fight once and haven't spoken for fifteen years. or maybe the old guy used to be a skater kid himself and realized one day that he'd wasted his whole life. or maybe a skater kid killed his wife. or his dog.

then again. maybe he was just Falling Down and had been pushed over the edge. i didn't see a briefcase, though. and he wasn't wearing glasses. or a tie.

so. that happened too.

Because something is happening here
But you don't know what it is
Do you, Mister Jones?
1:36 PM

Winnemucca's Own said…
those pictures are pretty!!!

I think it's a law of nature. 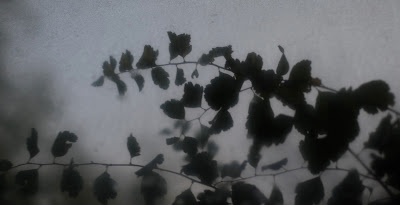 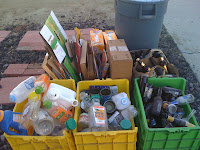